A (Bubble) Solution for Crop Pollination

A (Bubble) Solution for Crop Pollination

In this space, we’ve looked at the many ways the future of pollination is in flux. While various types of bees and alternative pollinators like moths and bats are working hard, researchers are still looking to supplement their efforts artificially. (After all, the stability of the planet’s food supply is at stake) But humans with tiny brushes are clumsy and require payment, and bee-sized drones can bump into and destroy the very flowers they are trying to cross-fertilize.

The team that created those very drones set out to develop a gentler way to pollinate. What they have come up with almost belongs on a playground rather than a farmer’s field — soap bubbles! A study of the method was recently headed by Ejiro Miyako, associate professor in the School of Materials Science at the Japan Advanced Institute of Science and Technology, and published in iScience.

“After confirming through optical microscopy that soap bubbles could, in fact, carry pollen grains, Miyako and Xi Yang, his coauthor on the study, tested the effects of five commercially available surfactants on pollen activity and bubble formation. The neutralized surfactant lauramidopropyl betain (A-20AB) won out over its competitors, facilitating better pollen germination and growth of the tube that develops from each pollen grain after it is deposited on a flower. Based on a laboratory analysis of the most effective soap concentrations, the researchers tested the performance of pear pollen grains in a 0.4% A-20AB soap bubble solution with an optimized pH and added calcium and other ions to support germination. After three hours of pollination, the pollen activity mediated through the soap bubbles remained steady, while other methods such as pollination through powder or solution became less effective.”

The team loaded up bubble guns with the solution, then blew bubbles directly at pear flowers in an orchard, eventually successfully producing fruit. A further test involving artificial flowers and bubble-enabled drones showed a 90% “hit” rate with the drones hovering at 2 meters. All meaning this can work in the wild.
Though further tests and refinements are needed, blowing bubbles on a beautiful spring day may soon have a purpose beyond pure fun — it will support bees and other pollinators in their efforts to keep us alive!

For those of you who don’t eat pork or meat, this recipe is for you! The technique is easy and fun, and our original BBQ sauce is the perfect support for the flavour of king oysters in particular. Maureen, my daughter in law and a vegetarian was inspired to create something that was interesting, tasty and a crowd-pleaser for the summer BBQ season.

When most of us hear “barbecue,” giant slabs of meat immediately float in front of the mind’s eye. However, there are increasingly tasty options available for vegetarians

also popping up every season. This recipe is one of them: A Southern BBQ classic — pulled pork — is reimagined for the veg crowd with chewy and savoury king oyster mushrooms. The grilled, pulled mushrooms are finished with DFC Original Spicy Barbecue Sauce* and served on a bun with a bright, snappy red onion pickle. No more cobbling together side dishes for veggie friends at your barbecue!

* DFC Original Spicy Barbecue Sauce is entirely vegetarian. The Worcestershire sauce we use is anchovy-free, though (sorry, vegans!) the formula does include honey.

If after reading this you are tempted to try out this recipe pay a visit to this page on our website where there is a complete list of ingredients and directions, including visible instructions.

Releasing the Soul of Chocolate — Through Science!

When this pandemic started, it seems like everyone on the internet immediately began baking. We snapped up all the flour and yeast, and manufacturers and sellers are only just starting to catch up with our taste to stay home, nurture sourdough, and eat many delicious carbs.

I felt the impulse too but was briefly stymied by the shortages. So, I thought of an alternative sweet treat I could make that would be just as soothing, but wouldn’t use the elusive ingredients: Chocolates! And I found inspiration in internet security expert and culinary enthusiast Samy Kamkar. He has developed a home version of a process that makes a gorgeous iridescent coating on tempered chocolate — using nothing but the chocolate’s own reflective properties.

Kamkar made his futuristic chocolates by enlisting his home 3D printer to make a precise acrylic mould, and his engineering know-how to develop an even-pressure vacuum.

“To make the chocolate, Kamkar created a mushroom-shaped mold with multiple ridges micrometers apart. He tempered the chocolate, poured it into the mold and then put it in a vacuum chamber to prevent air bubbles on the surface. […]

As Renusha Indralingam explained in Yale Scientific in 2013, iridescence occurs ‘when an object’s physical structure causes light waves to combine with one another, a phenomenon known as interference.’ In the natural world, hummingbirds, beetles, butterflies, peacocks and many other living organisms exhibit iridescent traits, which they can use to choose and attract mates or evade predators.”

The pretty phenomenon results from forcing the chocolate into the diffraction grating (which is used in other, less delicious, applications like telescopes and X-rays). This allows the light rays that hit the moulded chocolate’s surface to scatter, making an iridescent rainbow sheen. The chocolate must be very cold in order to produce the interference — so the confection’s beauty is enhanced by the fact it quickly fades.

A Swiss manufacturer, ETF Zurich, has spearheaded industrial method to making this iridescent chocolate and is planning on scaling it up to general manufacture soon. I await their efforts: Even though I am so looking forward to witnessing this optical phenomenon in person, it still takes too many resources for me to do in my home kitchen! 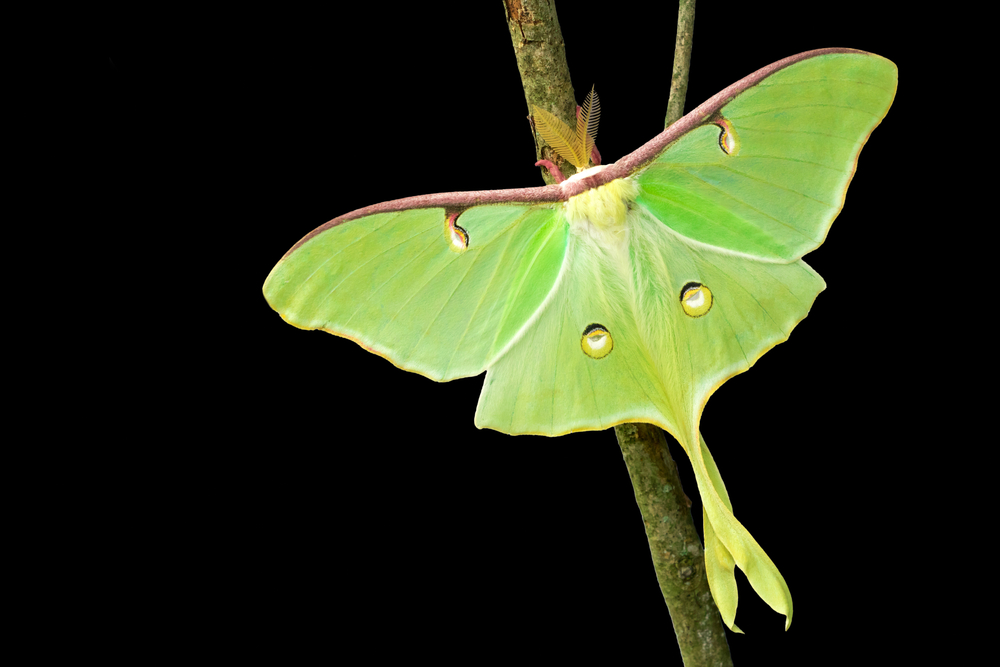 We at DFC love our bees. From adding to the biodiversity of our home in the Frontenac Arch to ensuring food supplies for the world at large, bees are superstar pollinators who have (rightly!) been earning all the press. As the hemisphere moves towards summer, the buzz of happy bees among the flowers outside has started filling the days at DFC headquarters.

But researchers at University College London have uncovered another powerhouse pollinator, that doesn’t fill the same spot in our imaginations, probably because it operates at night: The moth!

The UCL team’s research, recently published in Biology Letters, points to moths as being a more substantial contributor to pollination — and therefore crop yield — than previously thought. The study involved moths from nine pond-centred ecosystems in agricultural Norfolk, UK. They found that, not only did the moths pick up more pollen that butterflies and hoverflies (similarly to bees), but they visited a different array of plant species than any of their

“Nocturnal moth communities and daytime pollinators were surveyed once a month to see which plants they visited and how frequently.

Of the 838 moths swabbed, 381 moths (45.5%) were found to transport pollen. In total pollen from 47 different plant species was detected, including at least 7 rarely visited by bees, hoverflies and butterflies. 57% of the pollen transported was found on the ventral thorax of the moths.

The team’s conclusion: While daytime pollinating insects tend to visit “greatest hits” plants — maximizing their personal take of nectar by going to known prolific sources — moths are into the “deep cuts,” and going further for more obscure nectars. In terms of its effect on our food crops, the butterfly/moth approach is wonderfully complementary. The variety of the insects’ tastes supports the reproduction of a variety of plants, which helps ensure biodiversity!

The research team confirms further study is needed into the precise impact of moth pollination on food crops, but this is an excellent start. I’m sure the pollination situation in North America is similar. So, the next time a moth flits around my head as we both enjoy a warm summer night on the porch, I will wish them a hearty bon appetit!

Lego “Tapas Factory” Can Roll Appetizers Right Into My Mouth, Thank You

In this space, we’ve written about Lego many times, but never before has the ubiquitous Danish brick toy dovetailed so well with our current obsession, food! Via one of my favourite lucky-dip blog Boing Boing, I’ve discovered a charming video by Lego YouTubers The Brick Wall. In it, these spatial geniuses demonstrate a “tapas factory” built from the plastic bricks. This contraption takes a hungry user from a whole baguette to delicate hors d’oeuvres, primed for noshing, in four minutes flat!

Check out the factory in action here. The baguette forklift even doubles as a tray and beverage holder for the completed snack at the end.

This is definitely some serious Lego-ing, using motors and cutting blades that your average 7-year-old shouldn’t be trusted with. But for peckish, nostalgic adults, the Brick Wall folks have demonstrated a pretty cool proof of concept. With summer on its way and quarantines only gingerly lifting (LET’S NOT RUSH THINGS, PEOPLE), this Lego setup seems like the perfect patio combo: light bites and a distracting technical project rolled into one! Now, if I can somehow get one to do the barbecuing for us…