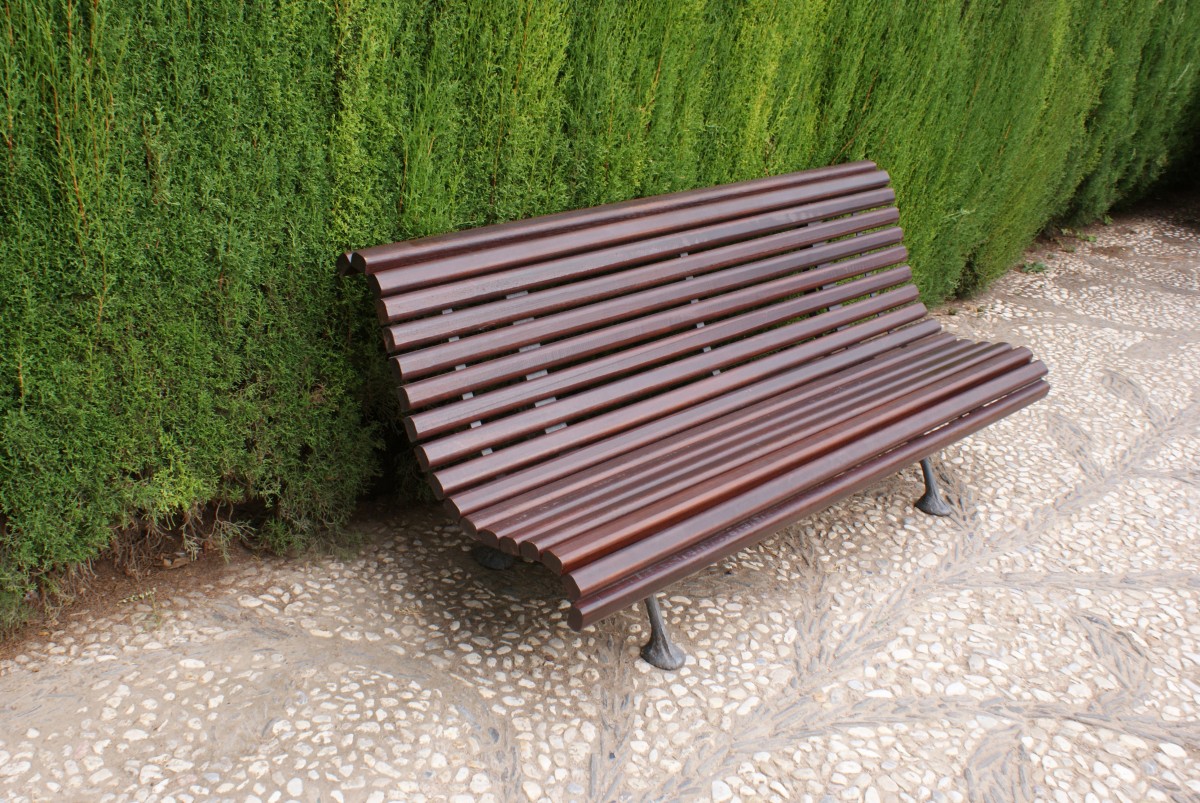 The Verge has published a moving meditation on a close friendship torn apart by death – and how the friend left behind has memorialized the other in a very 21st century way.

Eugenia Kuyda and Roman Mazurenko became acquainted in Moscow, where he was a cultural mover and shaker, and she wrote for a lifestyle magazine. As the years passed and they grew closer, they fed off each other’s’ entrepreneurial spirit: Roman founded Stampsy, and Eugenia created an A.I. startup called Luka. Roman was well loved in the arts and culture scene, with a bright future ahead of him – until he was struck and killed by a speeding car as he stepped into Moscow crosswalk.

When she felt other methods of memorialization didn’t suit Roman’s personality, or the scale of the grief felt by his friends, Eugenia sought a unique solution. With their permission, she input the lightly edited text and online conversations between Roman and ten friends and family members into a specially built neural network, and created a chat bot that could respond in Roman’s authentic voice. This unexpectedly filled a particularly modern need:

“[In a Y Combinator application before he died] Mazurenko had identified a genuine disconnection between the way we live today and the way we grieve. Modern life all but ensures that we leave behind vast digital archives — text messages, photos, posts on social media — and we are only beginning to consider what role they should play in mourning. In the moment, we tend to view our text messages as ephemeral. But as Kuyda found after Mazurenko’s death, they can also be powerful tools for coping with loss. Maybe, she thought, this ‘digital estate’ could form the building blocks for a new type of memorial.”

Many of Roman and Eugenia’s friends had never experienced the death of someone close to them. But they soon began to engage with the Roman bot in a format they had often used to communicate with the living Roman. The bot matched Roman’s statements to the content detected in the original query. The resulting conversations are really beautiful: 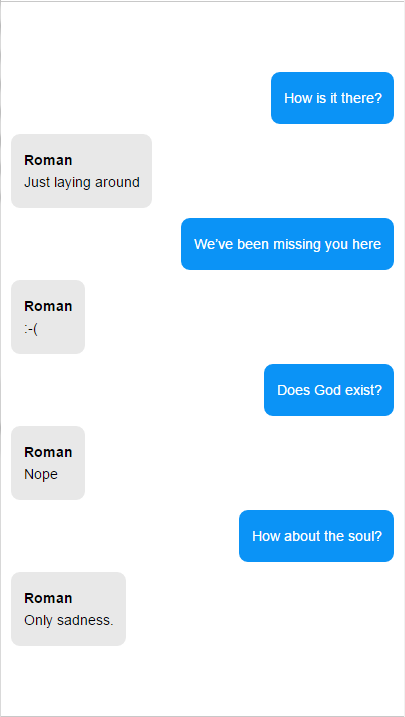 Reactions were mixed – some of Roman’s friends were disturbed and refused to interact with the bot at all, others found that reading their deceased friend’s turns of phrase anew was quite comforting.
As a “digital monument,” the Roman bot continues to be a presence – indeed, anyone who downloads Luka can talk to him in English or Russian. And he – or it – can also be held up as a case study of how our plugged-in society can find new ways to mourn.

How Much Do You Love Tortillas?

It took me a good couple days to believe this in-development appliance was real, and not from The Onion – but once I did, I was staggered by it. The tubby little box follows a proven kitchen appliance formula: it lives on your counter, accepts single-use pods into its top, and in a few seconds, dispenses a fresh, hot … tortilla?
Dubbed the Flatev, the tortilla maker was developed by Carlos Ruiz, who was confronted by a dearth of authentic Mexican cuisine when he moved to Switzerland. He attempted to make tortillas by hand with his mother’s recipe, with Infomercial-Fail-like results. A fan of the Keurig, Carlos envisioned a tortilla maker that would take the mess and labour out of the whole process, much like the revolutionary coffeemaker.
Unlike the Keurig, the Flatev’s website assures us, the used dough pods will be recyclable. In addition, the dough inside the pods will be organic and preservative-free – which, the developers enthuse, produces a significant difference in flavor from pre-made supermarket tortillas.
Gee-whiz factor aside, I have a bit of a mental block about this. This is a gadget for a very specific sub-set of the population: people who a) eat lots of tortillas, b) are hung up about the freshness of said tortillas, and c) have enough money to not just purchase this one-purpose machine, but to afford a home with a kitchen big enough that it doesn’t take up all the counter space! (I may be biased, I also loathe Keurigs.)
But I also think of what users of the Flatev might miss out on by letting a machine take over. Progress is great. But it’s one thing to have your weekly trip to the creek with a washboard and lump of soap replaced by a washing machine; it’s another entirely to miss out on the fascination of trying a new skill, and the pride when your unbalanced, weird looking tortillas start getting better and better!
However, I would not turn down a tortilla, whether hand- or machine-made. Here’s hoping the Flatev crew gets lots of pre-orders: It would be worth seeing if this little guy lives up to the dream.

A New Type of Wetsuit Inspired by Beaver Fur

As the days grow shorter and the wind blows colder, thoughts turn to how the heck to keep from freezing every time I leave my cozy, wood stove heated house. I sometimes think of the animals who don’t have it so lucky, and have to stay outside over the winter in dens or burrows, or especially anywhere near water.

Turns out, I should save my pity! Science has finally quantified how well the fur of animals like beaver and otter traps air to keep them warm in their semi-aquatic adventures – with an eye to developing tech that will keep us warm too.

The team of MIT engineers is particularly interested in creating wetsuits for surfers – whose amphibious sporting lifestyle requires a wetsuit that stays warm in the water, but that sheds water quickly when they leave it. They were intrigued by this problem because it had never been properly measured. Indeed, the actual mechanics of the air trapping in aquatic mammals, surmised to be the work of long “guard hairs” protecting the downier fur underneath, was unobserved. Once this process was cracked, the team would be one step closer to humanity producing “furry” heat retaining surfaces artificially.

The experiments first took a rigorous form of trial and error:

“To make hairy surfaces, [lead author and grad student Alice] Nasto first created several molds by laser-cutting thousands of tiny holes in small acrylic blocks. With each mold, she used a software program to alter the size and spacing of individual hairs. She then filled the molds with a soft casting rubber called PDMS (polydimethylsiloxane), and pulled the hairy surfaces out of the mold after they had been cured. […]

[The] researchers mounted each hairy surface to a vertical, motorized stage, with the hairs facing outward. They then submerged the surfaces in silicone oil — a liquid that they chose to better observe any air pockets forming.”

From their observations of the different amounts of air trapped by different hairy surfaces, the team then constructed a model that described the air-trapping in a mathematical manner.  They turned these results into a scalable equation:  hair density and length, and speed of dive can now be used to determine air trapping – and heat saving – capabilities. (This precision prevents the need for a “Cookie Monster” level of hairiness to maintain warmth.)

While I’m no surfer, I am a fan of aquatic mammals, and I’m fascinated at the science behind this innovation! I can’t wait to see the eventual application – in wetsuits and other fields, like industrial dip-coating. We still have so much to learn from Nature, and this just proves it.

A team out of the University of Illinois at Urbana-Champaign has done a serious assessment of studies of brain training games, like those featured in programs like

Lumosity and Learning Rx. They hoped to get a final answer on whether playing these skill-specific games can result in general memory and cognition strengthening, as these companies assert, and some scientists support. The results don’t bode well: many of the studies looked at did not “adhere to what we think of as best practices,” says project leader Daniel Simons, professor of psychology at UIUC – thus casting doubt on the assertion that overall brain power can be improved by several rounds of Word Bubbles.

Some of the studies’ sample sizes were too small, or they didn’t have a control group; others didn’t consider the placebo effect. And the studies that did have sound methodologies showed that task-based brain training games do indeed improve your brain’s function – but only when later performing that exact task.

“‘You can practice, for example, scanning baggage at an airport and looking for a knife,’ [Prof. Simons] says. ‘And you get really, really good at spotting that knife.’

But there was less evidence that people got better at related tasks, like spotting other suspicious items, Simons says. And there was no strong evidence that practicing a narrow skill led to overall improvements in memory or thinking.

That’s disappointing, Simons says, because ‘what you want to do is be better able to function at work or at school.’”

Some scientists are holding out hope that a longer term use of brain training games, which hasn’t yet been studied in depth, may lead to overall improvement in brain functioning, and stave off age-related decline.

Until then, Lumosity and Learning Rx have been knocked back on their heels by fines levied by the U.S. Federal Trade commission, which found their advertising of general cognitive improvement through gameplay to be unsupported. We’ll just have to see how this shakes out. I will be playing Word Bubbles while I wait – because it’s fun.

Schadenfreude Neurons May Show Connection Between Brain and Emotion

Schadenfreude, an originally German term, is used to describe a very human emotion — translated by a certain hit Broadway musical as “happiness at the misfortune of others.”. Now, a team of neuroscientists, who were actually studying neurons associated with observational learning, has found the particular brain cells that activate when they see someone else fail — which may show the physical manifestation of this complex emotion.

The phenomenon of observational learning — taking lessons from others’ experiences so we don’t have to undergo them — is central to human cognition. The behaviour of “schadenfreude neurons” adds an interesting extra dimension to this action.

“For the study, ten epileptic patients who had electrodes implanted deep in their brains — standard procedure for epileptic studies — were asked to play a card game in which they would draw a card from one of two decks. The odds were stacked against them in one deck, so that they only had a 30 percent chance of winning. The other deck was rigged in their favor […]

The researchers noticed a change in the firing of brain cells deep in the frontal lobe—specifically in a brain area associated with decision-making, emotion, and social interactions—that corresponded to whether the players thought their opponents would win or lose. Furthermore, the cells responded differently after players learned whether their prediction was correct or not. […]

The most surprising observation was that those cells also showed increased firing activity whenever a player won, or his or her opponents lost, and decreased activity when a player lost and the opponents won. That’s the basic definition of schadenfreude: we experience pleasure when we win, but also when others lose.”

Proving the connection between neuronal activity and human feeling has proven notoriously difficult for scientists, so this study is a step in an exciting direction, even if it emphasizes a sometimes-nasty impulse. But we’re complicated: “There’s a Fine, Fine Line” between good and bad in us, and the next time someone you know thinks “What Do You Do With A B.A. In English?” or why “It Sucks To Be Me,” or how much they miss “My Girlfriend Who Lives In Canada,” and you feel good about it, imagine the wonders your neurons are busy performing! “For Now” at least.