Often thought of as the disease that took out 19th-century opera heroines, in our modern day, pulmonary tuberculosis is far from obsolete. It killed 1.7 million people worldwide in 2016 alone. While antibiotics to fight TB were developed in the 1940s, many strains of the bacterium are drug-resistant, and can result in a painful, bloody, suffocating illness, in addition to possible death. Tuberculosis is also pretty contagious, spread when a sufferer coughs up the bacterium, which is then inhaled by someone else.

It’s therefore SUPER IMPORTANT that people with TB take the correct (and functional!) medications at their proper times. The traditional method of making sure this happens is to have a health professional visit a patient daily, bearing a barrage of meds, and have the patient take them while being observed. But that gets tricky in diffuse populations, or when clinic resources are tight. Enter, technology — specifically that tiny computer in everyone’s pocket, the smartphone!

Now I’ve set alarms on my own phone to remind me to take antibiotics, but the new app created by a team out of Johns Hopkins and UC San Diego takes patient accountability one step further. Called SureAdhere the app allows a patient to take their meds in front of their smartphone camera, then send the encrypted video to a medical professional, who reviews the images and ensures everything is as it should be.

This innovation grew out of difficulties experienced with medication adherence in San Diego County, an area of California next to the Mexican border.

“In 2010, [SureAdhere founder and UCSD professor Richard] Garfein’s group began a two-year study of video-monitored observation of 52 patients in San Diego and Tijuana that ultimately confirmed its efficacy: 93 percent and 96 percent of patients in those cities, respectively, adhered to their drug regimens while using video monitoring over an average of 5.5 months. Those rates are comparable to those of patients monitored through in-person therapy. A separate study in New York City reported an adherence rate of 95percent for patients using video monitoring, compared with 91 percent for patients who received in-person visits.”

This app not only frees up clinicians, who don’t have to spend time and money driving to their patients anymore, but the patients as well: the videos can be taken and uploaded securely anytime, and the patient isn’t tied down waiting for a home visit!

Some hurdles involve the prohibitive cost of smartphones for some people, as well as difficulties in understanding their operation. But, while capitalism and education work to lower those hurdles, this app can begin saving lives — and restoring livelihoods — to sufferers of tenacious TB.

Broadcasting the Future with a Flexible, Wearable Speaker

We at DFC have long looked forward to the Singularity — the point at which the exponential development of technology will end in self-awareness, and totally alter human life as we know it. Yay!

Already, there are so many of us who are bionic.  Now, a new wearable has joined the ranks of cool technology that changes how we interact with the world: it’s a tiny flexible speaker that adheres to your skin like a transparent sticker. Even more low-profile than a temporary tattoo, the speaker is a stunning example of engineering. From Science:

“After testing different materials, the scientists settled on grids of tiny silver wires coated with polymer layers, which were stretchy, transparent, and capable of conducting sound signals.

After receiving an electric audio signal from a music player, the tiny loudspeaker heats up the wire grid to about 33°C, which replicates the sound pattern by changing the pressure of the surrounding air. Our ears pick up these changes in air pressure as sound waves.”

In addition to allowing you to listen to your favourite tunes discreetly, the above process can be reversed, turning the speaker into a microphone. The technology has bionic applications as well, with the potential to be stuck to the inside of the ear to augment hearing or be used to amplify a voice when applied to the outside of the throat. Luckily, humans aren’t obsolete yet — but maybe our best strategy for survival is union with tech, rather than the competition!

Will Your Pet Cat Help You Become An Entrepreneur?

As dog people, we at DFC remain in opposition to our mortal enemies, cat people. Among the many reasons dogs are better than cats is the fact that, while yes, cats will poop in a box so it’s nice and convenient for you to scoop it, and so you don’t have to go hunting in your yard with a long shovel and a flashlight, or maybe an ice pick depending on the weather — dog owners don’t have to worry about catching toxoplasmosis from said poop.

Toxoplasmosis is a disease that results from infection by the Toxoplasma gondii parasite, which lurks in cat feces, and can cause flu-like symptoms. It’s also long been known to spark a range of behavioural differences, both in cats’ human “staff”, and in their prey. In mice, toxoplasmosis has been found to cause a loss of fear in mice of cats — even when the infection itself has cleared.

An international group of researchers have just discovered a fascinating consequence to toxoplasmosis infection in humans: an increase in entrepreneurship. If you think about it, it makes a lot of sense — what turns off fear and increases risky behaviour, fatal in mice, could actually be positive for human business! From the study’s abstract:

Using a saliva-based assay, we found that students (n = 1495) who tested IgG positive for T. gondii exposure were 1.4× more likely to major in business and 1.7× more likely to have an emphasis in ‘management and entrepreneurship’ over other business-related emphases. Among professionals attending entrepreneurship events, T. gondii-positive individuals were 1.8× more likely to have started their own business compared with other attendees (n = 197). Finally, after synthesizing and combining country-level databases on T. gondi infection from the past 25 years with the Global Entrepreneurship Monitor of entrepreneurial activity, we found that infection prevalence was a consistent, positive predictor of entrepreneurial activity and intentions at the national scale, regardless of whether previously identified economic covariates were included. Nations with higher infection also had a lower fraction of respondents citing ‘fear of failure’ in inhibiting new business ventures.

Though I’m still a die-hard dog fan, I find it fascinating that one of the major downsides of cat ownership has such an unexpected benefit for human behaviour. Good thing cat people are valuable, in that they are warm places to sit and have opposable thumbs — and aren’t edible!

A lot of birds are quite smart: take crows for example, who can recognize human faces and hold generations-long grudges against them. Or Alex the African grey parrot, who not only learned and used over 100 words in his 30-year lifetime but demonstrated an understanding of basic math.

But it’s not just the outliers or superstars who are drawing scientific attention recently. Researchers in Australia have performed an experiment on a whole population of fairy-wrens, in order to find out if they can learn concepts in a different bird “language” from their own.

They did this through a sort of immersion, similar to the supposedly best way for humans to learn languages too. The researchers walked through fairy-wren territory with small speakers on their wrists, which played the alarm sound of the non-Australia-native Chestnut-rumped thornbill. Others played a computer-generated buzzing sound. Once the individual birds were familiar with the new sounds, the researchers played them in tandem with sounds the fairy-wrens already knew to represent danger — including the fairy wren’s own alarm call.

“After three days, the scientists tested what the birds had learned — and their feathered pupils passed the test.

The two sets of fairy-wrens responded to the sound they had been trained on by fleeing for cover but remained indifferent to the other sound.

Twelve of the 16 birds fled at every playback; the other four birds fled in response to two-thirds or more of the playbacks.

To put it in human terms, it’s as though a person who only speaks English had learned that ‘Achtung’ means ‘attention’ or ‘danger’ in German simply by listening to people yell phrases with similar meanings in multiple languages at once.”

Fairy-wrens had previously been able to learn new sounds for “distress” in tandem with the presence of a predator. This experiment carefully removed the predator aspect, as well as isolated the birds from others whose behaviour they could observe. This means that the fairy-wrens learned “language” as language. Not bad for tiny dinosaurs!

Garlic is not just garlic! 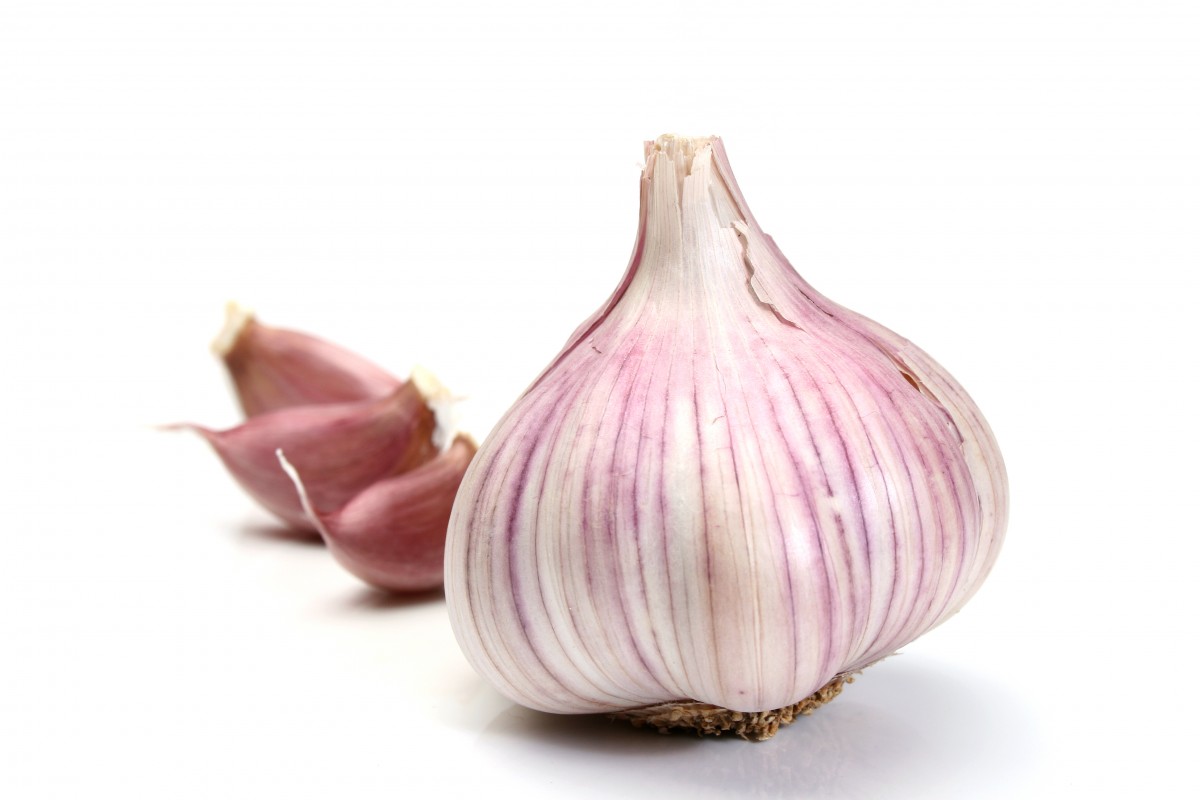 Ever since we watched the garlic episode on the Netflix documentary, Rotten, we made a vow to only use locally sourced garlic in our BBQ sauces (and upcoming new flavour sauce). One of our customers in Perth, ON supplies us with garlic but we are always looking for new suppliers – thus our foray to the Verona Garlic Festival on Saturday. We met with a potential supplier who gave us samples of five different varieties of garlic: Music, French Pink, Mild Marbled Purple, Ivan and Romanian Red. Our favourite is the Romanian Red because it’s the spiciest and strongest in that garlic flavour, however, the most popular variety grown here is Music. And these aren’t the only varieties…who knew?!? So, thanks to Netflix we will never buy the imported garlic again and will continue to enjoy the robustness of local garlic!