Fascinating Fungi: New Research Shows Mushrooms May “Talk” to Each Other

Fascinating Fungi: New Research Shows Mushrooms May “Talk” to Each Other

f, in some sort of creative thought experiment, I had to assign personality quirks to vegetables, I’d give “talkative” to carrots, or possibly broccoli. Never in a million years would I have considered mushrooms to be chatty, but recent research points to fungi as potentially being the “fun guy” you’d want at a party.

Professor Adam Adamatzky of the University of West England has mathematically analyzed the patterns of electrical impulses different types of fungi send to each other. In his research, published recently in Royal Society Open Science, Adamatzky studied the pulses sent between five different groups of mushrooms: Split gill, ghost, caterpillar, and the ever-delicious enoki. He asserts that the patterns he observed are similar to those found in human speech, and that mushrooms might have a vocabulary of up to 50 “words,” that they possibly use to communicate basic information to each other, through a network of mycelium made up of tendrils called hyphae.

“The most likely reasons for these waves of electrical activity are to maintain the fungi’s integrity – analogous to wolves howling to maintain the integrity of the pack – or to report newly discovered sources of attractants and repellants to other parts of their mycelia, Adamtzky suggested.

‘There is also another option – they are saying nothing,’ he said. ‘Propagating mycelium tips are electrically charged, and, therefore, when the charged tips pass in a pair of differential electrodes, a spike in the potential difference is recorded.’

Whatever these ‘spiking events’ represent, they do not appear to be random, he added.”

Maybe don’t send those party invites out quite yet: Though my imagination is already firing like so many propagating mycelium tips, Adamatzky and his colleagues in the field acknowledge this is early days. A lot more research and experimentation needs to be done before a portobello gets invited on Fresh Air. (For instance, this sort of pulsing behaviour has been seen in fungi before, where it indicated simple physical growth.) I for one hope Adamatzky and team get lots of funding and answers soon: I have a paper bag full of criminis sitting placidly in my fridge, and I fear they are planning something!

Readers of this newsletter will be familiar with the scourge of palm oil, which we looked at in a previous installment. Palm oil is a creamy, high-smoke-point fat that can be found in a staggering number of prepared foods, cosmetics, and industrial products. Its value has led to the deforestation of large swathes of Malaysia and Indonesia in favour of tracts oil palm trees, destroying the natural habitat of critically endangered orangutans. In addition, child labour is often used in the farming and harvesting of this oil.

As dirty as the palm oil industry is, we’ve all seen how hard it is to uncouple capitalism from cheap ways of doing things. That’s why this recent news from Singapore’s Nanyang Technological University and Malaysia’s University of Malay is so exciting: They’re investigating harvesting oil from a common micro-algae to replace – and health-wise, even surpass – palm oil. The fascinating process has been detailed in a recent Journal of Applied Phycology

“For the study, the researchers added pyruvic acid – which is an organic acid present in all living cells – to a solution consisting of the micro-algae and a liquid growth medium. The mixture was then exposed to ultraviolet light, to stimulate photosynthesis. After 14 days, the algae was removed, washed, dried and then treated with methanol. The latter treatment was required in order to break the bonds between the algae proteins and the oils produced by those proteins during the photosynthesis process.

The harvested oil is said to possess qualities similar to those of palm oil, although it contains significantly fewer saturated fatty acids, offset by a larger percentage of heart-healthy polyunsaturated fatty acids. In the present version of the technology, 160 grams of algae would be required to produce enough oil to manufacture a 100-gram chocolate bar.”

To boost the sustainability factor, the team notes they are able to derive the pyruvic acid which kick-starts the procedure from food waste, like fruit peels and soybean pulp. They also envision large scale production that uses sunlight as the required UV light source – one step away from literal farming itself!

This innovation is so low cost, I really hope it catches on. Palm oil is one of those things that we can afford to have “go extinct” – I’d rather have my cake and orangutans too. 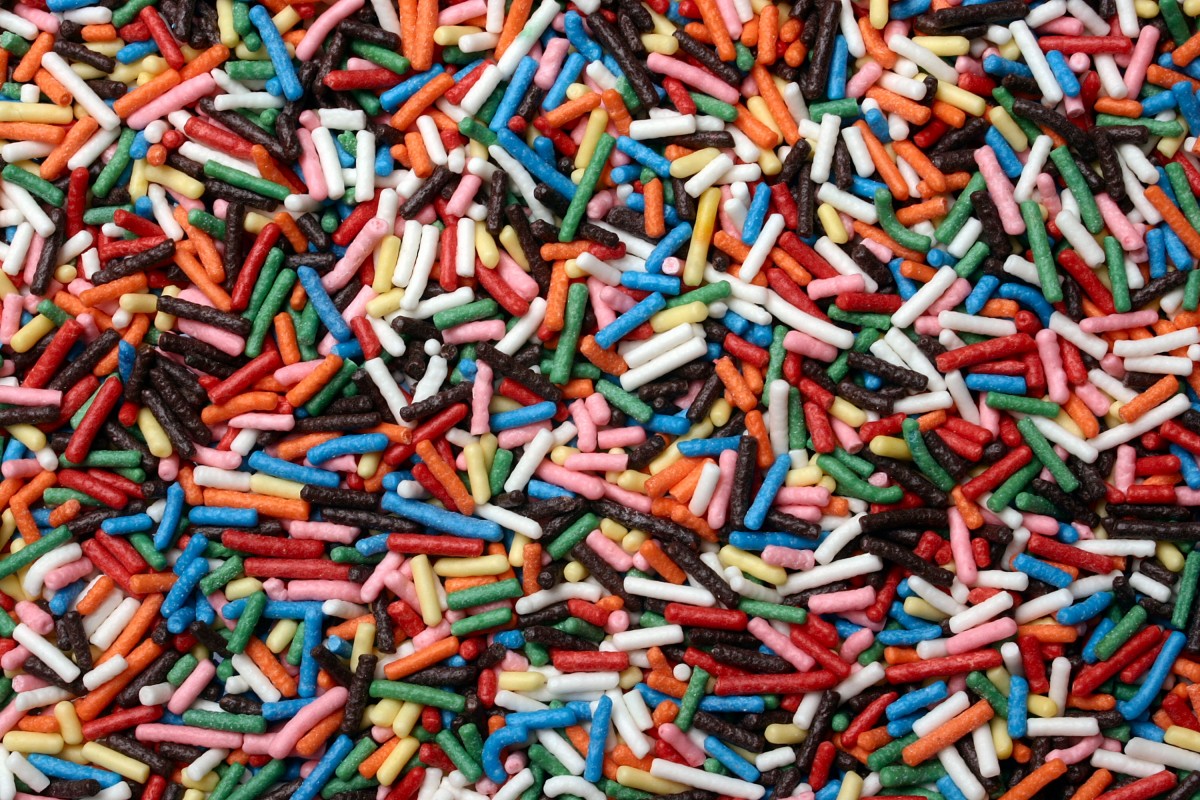 It seems the banning of American-made sprinkles in the UK might hurt the folks at Get Baked (of the famous sprinkle-bereft raspberry glazed doughnut cookie more than we originally thought*: Taste has made a solid case that sprinkles are having quite a cultural moment. In an age when everything needs to be meme-able, a sowing of impressive sprinkles can make a home-baked cake shine more than tricky-to-master piped frosting. But where did this very 21st-century trend in very tiny confections come from?

[…Many] forms of sprinkles were available throughout 19th-century America, as they were in Europe and elsewhere. Some versions may have been inspired bymukhwas, a South Asian sweet snack of candy-coated fennel, anise, and other seeds (only these served a nutritional purpose, to aid digestion and freshen breath after a meal). For instance, the Dutch brand De Ruijter sells candied anise seeds under the trademarked name “muisjes” (meaning “mice”), among other varieties of little candy toppings, including hagelslag (meaning “hailstorm”).

There’s a Dutch tradition of new parents offering pink-and-white or blue-and-white muisjes on biscuits to friends and family to celebrate a birth, says Dutch food writer Dorothy Porker. As for the long, skinny, sprinkle-esque hagelslag – and often chocolate hagelslag, which, unlike in the United States, must contain at least 32 percent cocoa – there is no need for a special celebration. It’s a common feature of breakfast and lunch, where it’s sprinkled on bread; a canister of the stuff is often set on tables next to salt and pepper.”

From early beginnings to the Great NYC Cupcake Wave at the dawn of the century, sprinkles have been the little candies that could. I wonder if Instagram and TikTok will further serve sprinkles’ proliferation – or if we’ll be seeing a bust anytime soon?

* But don’t worry: All is not lost for the folks at Get Baked! In researching this post, I checked in with their – delightfully profane – social media. Head baker Rich Myers has parlayed the lemons West Yorkshire Trading Standards gave him into lemonade flavoured sprinkles, by founding his own %$#! sprinkle company. Dubbed Expen$ive Sprinkles (I bet in an even combo of rage and marketing genius), the company only debuted last month. The sprinkles look stunning, with rich colours and a satisfyingly round heft. I hope they’ll be able to ship to Canada at some point – I’d love to do a taste test opposite the dreaded banned sprinkles here across the pond!