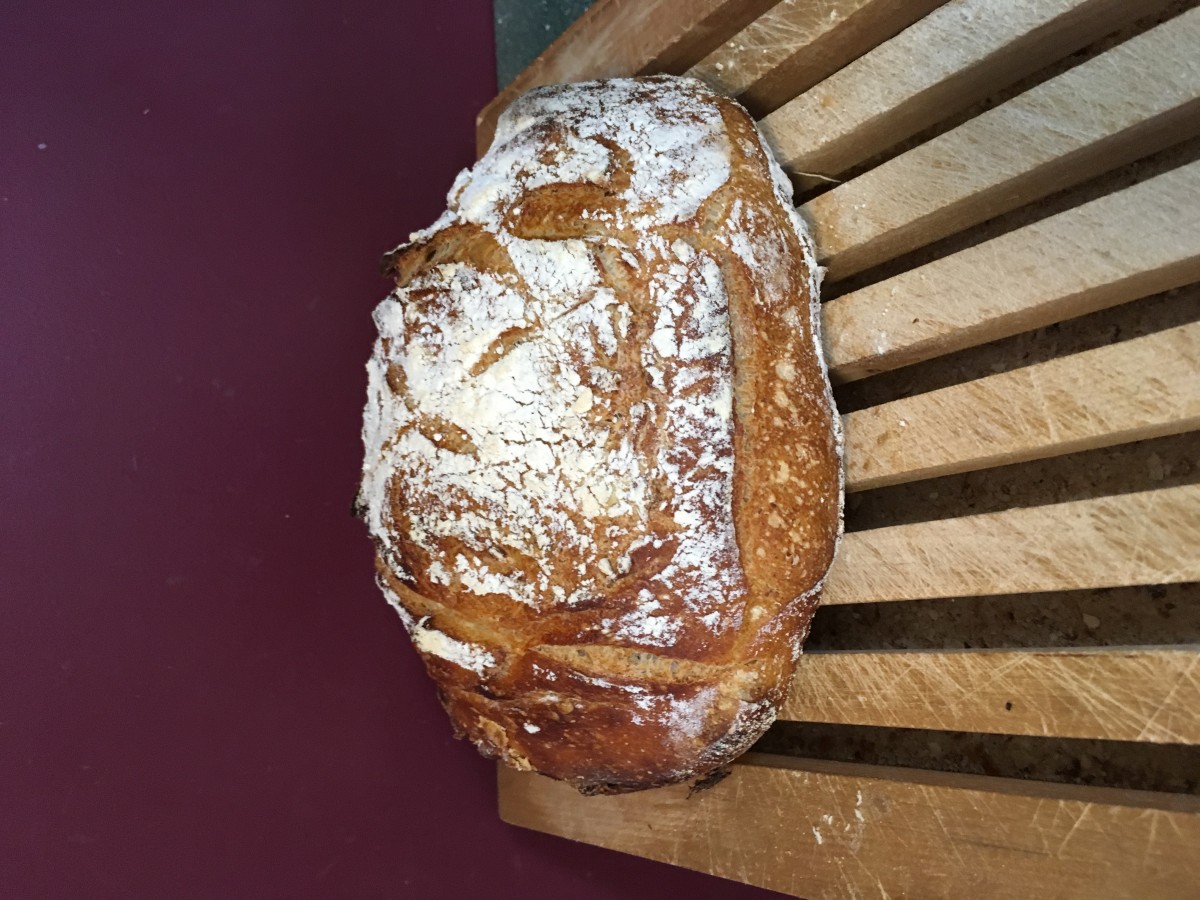 I’ve been dabbling in the sourdough subculture (pun intended!) since my daughter-in-law gifted me with a splinter of her starter in the spring. Ever the chemist, I loved experimenting with it — and chowing down on its amazing returns — until I pushed the envelope a little too far and it gave up the ghost.

But all is not lost! I’ve gained new inspiration from Xbox creator and bread nerd Seamus Blackley’s fascinating baking saga. In July, archaeologist Dr Serena Love helped Blackley access Ancient Egyptian beer- and bread-making pots from the Museum of Fine Arts, Boston, and the Peabody Museum of Archaeology and Ethnology. Blackley then collaborated with grad student Richard Bowman to collect the yeast microbes inside the pots, which had been dormant for four and a half millennia. Blackley revived a sample of the sleeping yeasties in sterile conditions, and proceeded to bake an authentic loaf of Ancient Egyptian bread with them! Chemical & Engineering News details the science:

“Bowman says they were inspired by Israeli scientists who harvested yeast from ancient beer-brewing vessels, then brewed their own beer with it. The Israeli researchers filled vessels with a nutrient solution to capture their yeast, but Blackley and colleagues wanted to develop a lower-impact method. […]

Blackley used cotton balls and liquid yeast food to lift the microbes from the surface of pottery. Excepting what he kept to make bread, he sent the samples to Bowman, who plans to sequence the genomes of the yeasts to determine their age and whether they are related to modern species.”

Wild yeast notoriously has a mind of its own, so Bowman estimates about a 30% chance that Blackley’s Frankenstarter is derived from a modern contaminant. But I think those are pretty good odds. And it’s pretty good bread: Blackley described his first barley, einkorn, and kamut flour loaf as “AMAZING and NEW. It’s much sweeter and more rich than the sourdough we are used to…The crumb is light and airy, especially for a 100% ancient grain loaf. The aroma and flavor are incredible.”. Who knew eating like an Egyptian could be so satisfying?

Every time I have to call into a large company – especially my wireless provider, telephone company, cable company, etc. I have to gird every part of my being to get ready for what is almost always a frustrating and futile experience. Offshore call centers is usually the crux of my despair. So when I run into someone who gives me at least adequate service I am giddy. If I get competent and caring service I am floored and vow never to take my business elsewhere. I had this experience the other day, but first some background. (if you want to get to the outstanding service story skip the next paragraph).

Having recently moved to rural Canada from the largest urban center in the country I have had to deal with a multitude of service agents to transfer my phone, initiate my Hydro (Electric to non-Canadians) service, etc. My cell phone bill was totally messed up for three months until someone caring and competent fixed it once and for all and actually followed up to make sure the billing was correct! This in itself was amazing and stood as an example of how excellent service is not dead…until this week.

It’s almost November and everyone around here is preparing for winter. Coming from a big city naturally this gave me pause—it seems that here getting ready for winter is more than clothes & Christmas shopping. One item on that “get ready for winter” list is snow tires. Actually now they’re call winter tires (so that they can charge more by installing four tires)….Anyway after looking around and comparing prices, I decided to go to the local GM dealer in Kingston, Taylor AutoMall, because the price was very competitive and if anything went wrong, service would be readily available. Well something went wrong. The next morning after I had the winter tires installed, one was totally flat. I called my service guy, Scot at the dealer and told him there was something wrong. I proudly told him, that I live in the country and could fill the tire and drive over. It’s about a 30 minute drive to the dealer and Scot told me that if the tire goes flat while driving it could ruin the wheel or tire. He gave me all the necessary information to call roadside service and a couple hours later I was back at the dealer for the second time in two days. It turned out that the wheel was defective and another one had to be ordered in – the timing was tricky as I was going out of town the next day to a wedding. So the original tires were put back on and I was on my way in record time because I had a hairdresser appointment I couldn’t miss an hour away. Fast forward to this week…we are back in town and I knew that I had to make a third trip into Kingston to get those winter tires on. The replacement wheel had come in on that Friday, Scot made sure the tire was put on so that everything would be ready to go when I came back. When I called Scot to make that third appointment he mentioned that he had something for my inconvenience. When I arrived to get my tires switched around, again it was done right and in a very timely manner. Plus I was given a voucher for detailing my car! My car is the dog’s car – it is in constant need of cleaning so I was gobsmacked!

Yes, the car detailing voucher was the icing on the cake. The defective wheel was “just one of those things” however, what Scot at Taylor AutoMall did all along was to understand what the problem was, the possible consequences (not driving on it) and the best way to correct the situation for me, the customer and my car all within understanding the framework of the service department so as to how to deliver the best service.