‘Tis the season for the creepy, kooky, mysterious, and spooky — it’s Hallowe’en! Back in civilization, I used to love handing candy out to the neighbourhood kids; I think this year we’re going to have to be satisfied with dressing up the dogs.

But underneath the costumes and the sugar rushes, Hallowe’en has another purpose: it lets us confront scary and uncanny things in a healthy and fun way. In line with this theme was our look at the controversy around “space” burial. I’ve kept looking into the macabre nexus of death and tech, and, in the spirit of Hallowe’en, offer a look into a fascinating innovation just around the corner in Smiths Falls, ON.

A funeral company there is offering “green cremations” in the form of alkaline hydrolysis: instead of burning human remains, AquaGreen Dispositions dissolves them in a mix of potassium hydroxide and water, and then drains the result into the municipal wastewater system. For [60% water] thou art, and unto [water] shalt thou return!

Once the cycle is complete, the caustic fluid from the pressure vessel passes through two filters and on into the municipal sewer system, leaving only the skeleton behind.

Those bones, soft and wet from the alkaline hydrolysis process, are then dried in a convection oven, pressed into a fine white powder and finally returned to the loved one’s family to be scattered.”

Unlike standard burial, which leaches embalming chemicals into the earth; or traditional cremation, which involves burning of natural gas or propane, and releases carbon dioxide into the atmosphere alkaline hydrolysis purports to be “entirely green.” This is great news for consumers — and also the folks in the town’s wastewater treatment, who have been keeping an eye on the flow from AquaGreen’s facility and have given it a thorough thumbs-up for safety!

So this Hallowe’en, while I’m at home eating tiny chocolate bars and unsuccessfully trying to attach a Superman cape to Samson, I’ll be sparing a thought for the travellers to the undiscovered country, who are taking an unusual route via Smiths Falls. 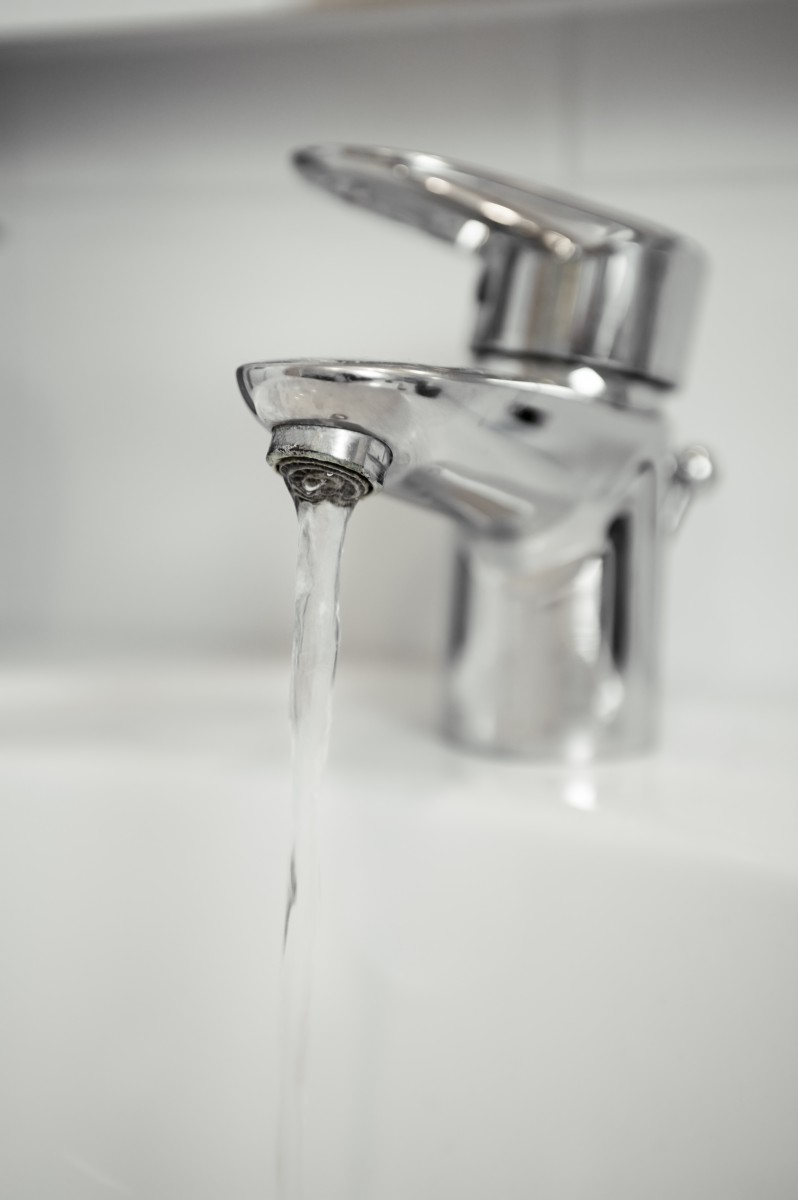 This amazing story hits the sweet spot for me as both a now-grown kid science nerd and transplanted Michigander — I just had to share! 11-year-old Gitanjali Rao has been named the grand prize winner ($25,000!) of the 3M Young Scientist Challenge, for Tethys, a device she created that can quickly pick up on lead levels in water. She was inspired to do so by the contamination that has been plaguing the city of Flint, MI, and by an article on new technologies that she spotted on MIT’s website.

Tethys was devised as a low-cost, personal lead-testing device that uses carbon nanotube sensors. Connected to a user’s smartphone, it then shows the results of tested water within a proprietary app – faster than any other lead sensor on the market today.

The process this whiz-kid and the other finalists went through sounds fascinating. From 3M’s press release:

“During the past three months, Gitanjali and the other finalists had the exclusive opportunity to work directly with a 3M scientist to develop their innovations as part of a unique summer mentorship program. Gitanjali was paired with Dr. Kathleen Shafer, a 3M research specialist who develops new plastics technologies that have real-world applications in dentistry and other fields.

Each of the students collaborated with some of 3M’s leading scientists, who provided guidance as they worked through the scientific method to advance their ideas from a theoretical concept into a physical prototype. Together, the 3M mentors and finalists shared their passion for science, reviewed the scientific process and worked virtually through pre-assigned objectives[.]”

Rao hopes that her invention will help people like those in Flint take charge of their own lead exposure in a simple way. With bureaucracy at the centre of the Flint water crisis, grassroots action may prove the best way around it.

Future Funerals: Space as Burial Ground Not Yet Achieved

Ascension, a company out of the UK, is catching a bit of flak from geeks for misrepresenting its primary service: scattering human ashes in “space.” Unlike other existing companies, whose space burial services involve launching a sealed craft into orbit for later, earthly retrieval; or NASA, who piggybacked Eugene Shoemaker’s ashes on the deliberately crashed Lunar Prospector probe as the first (and currently only) burial on the moon, Ascension pledges to release your loved one’s ashes in space proper. The contentious issue is their precise definition of “space.”

The company claims it will take an ashes-bearing helium weather balloon up 35 kilometers, into the stratosphere. According to their website, this is well within “near space,” according to the definition that considers the Armstrong limit the border of our atmosphere. (The Armstrong limit is 19km up, and marks the point where protective suiting must be worn because the water in our bodies boils at our ambient temperature.)

But, experts don’t necessarily consider that far enough to be space. The most commonly accepted border between atmosphere and space is the Kármán line, which is located about 100km above the surface of the Earth, and well above the Armstrong line.

Ascension may be using a more romantic definition of where space starts for laypeople who just want a bit of Grandpa to join the constellations he loved so much. But, fudging aside, it may be better in the long run than sending Grandpa into the depths of space. Because then, he becomes debris.

“‘If ashes were scattered in orbit, which these are not, then they’d join the millions of tiny bits of space junk which are traveling at speeds of 7-8 km per second, [space archaeologist Alice Gorman of Flinders University (Australia)] said.

‘Junk this size causes damage to spacecraft by constant bombardment. Each impact is trivial but there’s a cumulative effect. Fortunately, in Low Earth Orbit, this stuff usually enters the Earth’s atmosphere quickly.’”

And burns up harmlessly.

So, while we don’t yet have the opportunity to mingle with the stars from whence we came, post-mortem, I think it’s a fair tradeoff to not accidentally take out the Soyuz. Besides, there are still so many intriguing options for burial on earth! There is still plenty of time to look to the skies.

At The Speed of the Screenreader: A Blind Programmer Shares His Method

I love stories of humans who have managed to develop a closer bond with the machines. The optimist in me believes wholeheartedly that humankind is that much closer to the Singularity every time a new prosthetic arm is developed! Which is why this piece by Finnish programmer Tuukka Ojala, over at the blog for Vincit, his software development company, is THE BEST.

Ojala, who is blind, describes the nuts and bolts of his working procedure. Most of his strategies offer an experience that seems closer to the way a computer might “think” than that of sighted monitor-and-mouse users. (In fact, he’s long used a screen reader that fires off what he’s working on at a staggering 450 words per minute!) Ojala says he is most at home on the command line, the most text-based basic access point to a computer’s programming. But unfortunately, too much of his working style is dictated by a lack of accessibility among his tools (which is a problem in the industry).

“[G]iven my love of the command line, why am I sticking with Windows, the operating system not known for its elegant command line tools? The answer is simple: Windows is the most accessible operating system there is. NVDA, my screen reader of choice is open source and maintained more actively than any other screen reader out there. If I had the choice I would use Mac OS since in my opinion it strikes a neat balance between usability and functionality. Unfortunately VoiceOver, the screen reader built in to Mac OS, suffers from long release cycles and general neglect, and its navigation models aren’t really compatible with my particular way of working. There’s also a screen reader for the Gnome desktop and, while excellently maintained for such a minor user base, there are still rough edges that make it unsuitable for my daily use. So, Windows it is.”

In addition to coding like a demon, Ojala has taken up the mantle of general accessibility consultant at his job: “Or police, [depending] on how you look at it.” He has ideas about how to make coding, and web pages in general, more accessible for users who are blind or visually impaired. I’m looking forward to reading more of his blog, for the inside scoop on accessibility, as well as the wonderful world of coding. (Singularity, here we come!)

A “Mann” For All Seasons: Foiling Tech Sexism with a Fake Male

As a woman in the technical field of computing (and having transitioned from a long career in the technical field of chemistry), I’ve come up against many insidious examples of sexism in my time. Oh, how often have I wanted to give the perpetrators their comeuppance — but been unable to without blowback! So I applaud in vicarious glee the ingenious solution a pair of L.A. artists cooked up.

Penelope Gazin and Kate Dwyer co-founded the online bizarre-art marketplace Witchsy. When developing the platform, they started detecting condescension and disrespect in emails from outside developers and designers, who were often male. Gazin and Dwyer had an inkling that these men were addressing them this way because they were young women jumping into a tech endeavor. So they invented a third, fictional cofounder, a man named (get this) “Keith Mann,” and started corresponding with troublesome contacts as him.

“‘It was like night and day,’ says Dwyer. ‘It would take me days to get a response, but Keith could not only get a response and a status update, but also be asked if he wanted anything else or if there was anything else that Keith needed help with.’

Dwyer and Gazin continued to deploy Keith regularly when interacting with outsiders and found that the change in tone wasn’t just an anomaly. In exchange after exchange, the perceived involvement of a man seemed to have an effect on people’s assumptions about Witchsy and colored how they interacted with the budding business. One developer in particular seemed to show more deference to Keith than he did to Dwyer or Gazin, right down to the basics of human interaction.

There’s an awful lot of light being shined on sexism in tech industries these days. What Dwyer and Gazin have contributed to this conversation is concrete evidence of how ridiculous the sexist impulse is: all it took to get their correspondents to wise up was a man’s signature at the bottom of an email. Hopefully, their evidence will join the massed amount of other undeniable proof of the sneakiness of sexism, and help turn the tide. Until then, Dwyer and Gazin have said they have retired Keith — but still envision having to resort to him again.