A team of sports medicine specialists have taken a closer look at Chestnut’s results with a key question in mind. That a very regular-looking human (his jaw doesn’t even unhinge!) can put away over six dozen tubes of processed meat at a rate of one dog every eight seconds is subjectively stunning; but how close is this feat to the objective upper limit of the sport? In short, is Joey Chestnut, in the words of study author James Smoglia, the “Usain Bolt” of hotdog-eating?

Turns out, he is. Smoglia’s team analyzed data from 39 years of the historic sausage gauntlet, using predictive mathematical modelling they usually applied to improvements in more traditional sports.

“Improvement curves in elite sports ranging from sprinting to pole vaulting tend to follow a so-called sigmoidal curve, featuring an initial slow and steady rise, followed by an era of rapid improvement and finally a levelling off. ‘Hotdog eating has definitely reached that second plateau,’ said Smoliga.”

After an early period where contestants relied on natural talent and how their stomachs were feeling the day of competition,

“[elite] eaters started to follow elaborate training regimes, with some ingesting vast volumes of liquid or gels to expand the stomach without having to process the calories. Chestnut, this year’s winner, claims to train for three months leading up to the competition, including weekly practice runs, a carefully controlled diet and yoga and breathing exercises to help with mental focus.”

This victory seems proof that really any action can be turned into a sport if training goes into it. But, like any other sport, there is a physiological limit to hotdog eating: by fitting the hotdog data to the rest of the sigmoidal curve, Smoglia and team predict that 84 hotdogs in ten minutes are the most any typical competitor can hope to eat, even with high-level training. Which makes “Jaws” Chestnut elite indeed!

While the condiment connoisseur in me winces at one of the best-loved barbecue options being relegated to so much world-record-fodder, I salute Mr Chestnut and his feat. I hope he gets the opportunity to sit down this summer next to a sizzling barbecue and enjoy a hotdog the way the grill gods intended — slowly savoured with a favourite topping or two. As I hope we all can! 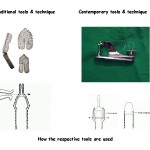 As a mother of three boys, I was always put into a faraway room during my sons’ brit milah. So I’m not familiar with the actual procedure, just the after-effects. I had another family doctor attending my third pregnancy (long story not relevant here) who unlike my previous doctor was not Jewish. After successfully delivering my third son, this doctor when finding out we were passing on circumcision at the hospital, shyly asked if he could attend our son’s brit. Of course, I said yes (this was already my third and it was “old hat”).

I understand that during the brit ceremony my doctor unlike the other men, did not look away – he stayed back to be polite but was very attentive during the procedure. Afterwards, my doctor was so excited he related how “our way” of circumcision is almost foolproof as it is so uncomplicated compared to the modern surgical way of doing it with the Gomco clamp. He said that there were often many complications and whoopsies with the clamp method. I, of course, replied that we’ve had time to work out the kinks. This brit took place in the late 1980s and I am sure techniques in both the Jewish world & the medical world have changed and evolved, as things like this do.

Hummingbirds May Count To Find Their Food

At DFC, we are well aware of how motivating food can be. After all, the prospect of bringing more delicious barbecue into the world was the main reason behind our own pivot to the condiment and sauce business!

There are many other species (including monkeys, octopuses, and dogs) that are just as keen as humans are to do extraordinary things for FREE SNAX.  But researchers have recently added an unusual animal — the hummingbird — to that list. And it turns out the teeny avian acrobat might actually source its meals with a truly amazing skill: counting.

Biologists at the University of St. Andrews set up a series of experiments with male rufous hummingbirds, who are known for their territoriality, and thus, long memories. They also have exhibited precise, repeated routes among nectar-heavy flowers in the wild, which indicated to researchers they had some way of knowing where the jackpot was.

“To find out, the researchers set up feeders with a nectarlike syrup in a valley in North America’s Rocky Mountains, just in time for the hummingbirds to start arriving in May. […]

Then, the team began rearranging the flowers after each visit, mixing them up — and even moving the entire line — so that the position of the flowers couldn’t give the birds information about which flower had the syrup. Even then, the birds chose the first flower in the line, suggesting they had a concept of “first.” And when the team repeated the entire experiment but baited, say, the third flower, the birds usually zoomed straight toward the third flower. This suggests they knew the third flower in line — regardless of where the line actually was — had the treat.”

This kind of spatial smarts results in an efficiency that must save so much time and effort in the wild. (Adjusting for body size, if a human were to eat as much as a hummingbird needs to in a day, we’d clock in at up to 155,000 calories! That is a lot of flitting around and sipping nectar!)

More research needs to be done, to determine if the hummingbirds are using any other hidden strategies besides counting. But the current results are promising — and testify to the power of food to spark the development of some amazing skills!

As summer hits its stride, we at DFC are enjoying keeping cool by any means necessary. Usually, a fresh breeze off the water greets us in the morning, but on particularly sultry days, I’ve found beating the heat needs to start as early as possible. This means I’ve retired my auto-drip for the summer and ventured out into the world of cold-brew coffee in search of my morning fix.

I learned a simple recipe: 1 cup coarse grounds floated in a pitcher of water and left to steep overnight in the fridge before filtration and enjoyment the next morning. But, as it turns out with all things food, there is a remarkably complicated lore behind the beverage. Nathan Silva at the food science blog Food Crumbles explains the science behind cold brew — including its legendary smoother taste.

“The main benefit most people will tell you there is with a cold-brewed coffee is the reduction in acidity. For a lot of everyday coffee drinkers, the acidic profile of most hot brewed coffees is an undesirable trait. This has caused cold brew coffee to boom in popularity. But is this ‘benefit’ actually real?

If you ask Megan Fuller, Ph.D., and Niny Rao, Ph.D., of Philadelphia University, the answer is: kind of. Through their research, they found that the same coffees brewed by both hot and cold methods, had a fairly significant difference in pH — an analytical measurement used to measure the acidity of a product. However, it was found that the roast of the coffee bean itself had a larger pH differential than the brewing method. So, choosing a good roast is has more impact than changing over brewing method. But if you’re stuck with one bean, the brewing method can help you get the desired acidity!”

Silva’s article is full of tips about brewing, bean choice, and even water temperature, which can be used to guide basically anyone to a balanced, perfectly cold glass of java. I’m going to refine my technique myself. I’m already sold on the time-saving aspects; now I juuuust want to get my coffee to barista-level flavour, so I never have to leave my sunny morning deck/workplace again!