The Human Sweet Tooth and our Ancient Brain

The Human Sweet Tooth and our Ancient Brain

Finally, a scientific reason why I keep forgetting that bag of carrots in the back of my fridge until they turn into a mouldy, noodley tangle! Researchers at Wageningen University & Research in the Netherlands have shown one particular way in which humans have retained our “Stone age brains”: We are hardwired to remember the locations of calorie-dense foods far more accurately than “lighter” foods. Bye-bye, carrot sticks; hello carrot cake.

The study involved 512 participants, who were each guided through a room where the researchers had planted eight samples of actual foods or eight food scents (on cotton pads). The participants smelled the foods or food scents, and then rated them by how appealing they found them. Half of each kind of sample were high calorie (like brownies and potato chips), and half were low calorie (like apples and cherry tomatoes). When the participants were later asked to point out the samples on a map of the room, they were 30% more accurate at recalling the locations of the high-calorie samples — and 243% more accurate when the foods were real, instead of just scents.

“‘Our main takeaway message is that human minds seem to be designed for efficiently locating high-calorie foods in our environment,’ says Rachelle de Vries, a Ph.D. candidate in human nutrition and health at Wageningen University and lead author of the new paper. De Vries feels her team’s findings support the idea that locating valuable caloric resources was an important and regularly occurring problem for early humans weathering the climate shifts of the Pleistocene epoch. ‘Those with a better memory for where and when high-calorie food resources would be available were likely to have a survival — or fitness — advantage,’ she explains.”

Once upon a Pleistocene, this cool talent saved our bacon. But there is a downside for today’s humans. For those of us lucky enough to live where sugar and fat are readily available, the ancient instinct to zero in on it and eat as much as possible (lest we not find another source for months, or get gored by a mammoth tomorrow) is a contributing factor to the modern scourges of obesity and diabetes. Retraining our brains in a habit that is so deeply ingrained may not be possible — so I plan to rely on my frontal lobe writing me a sticky note on my fridge, that just says “CARROTS.” Once remembered, whether or not I eat them is another story…! 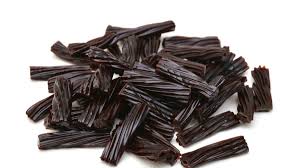 With Halloween approaching, DFC’s staff fancies are lightly turning to thoughts of… CANDY! We’ll likely be keeping the traditional bowl by the front door to ourselves though, as celebrations all over are in upheaval because of COVID-19. (Besides, given our rural location, we probably wouldn’t be handing out the good stuff to the assorted Black Panthers and mermaids and Baby Yodas hoping to score big anyway.)

Massachusetts died last month after consuming his favourite sweet, black licorice, at the staggering rate of “a bag and a half every day for a few weeks.” According to doctors, the man’s heart stopped due to an arrhythmia caused by low potassium — the direct result of consuming an excess of glycyrrhizic acid. Glycyrrhizic acid comes from licorice root, which can be used in a variety of foods, both obvious, and scarily not.

“‘It’s more than licorice sticks. It could be jelly beans, licorice teas, a lot of things over the counter. Even some beers, like Belgian beers, have this compound in it,” as do some chewing tobaccos, said Dr. Robert Eckel, a University of Colorado cardiologist and former American Heart Association president. He had no role in the Massachusetts man’s care. […]

The FDA permits up to 3.1% of a food’s content to have glycyrrhizic acid, but many candies and other licorice products don’t reveal how much of it is contained per ounce, [cardiologist Dr. Neel] Butala said. Doctors have reported the case to the FDA in hope of raising attention to the risk.”

Black licorice is loved and hated, and the fate of the unfortunate Massachusetts fan has only rendered the treat’s reputation even more complicated. This Halloween, remember to enjoy everything in moderation — and when in doubt about your candy tastes, check with a doctor!

A (Subway) Bread by Any Other Name Would Taste as Sweet

Jokes aside, this is not a thought experiment — the highest judicial body of an already starch-knowledgeable nation has come down hard on Subway (the sandwich chain) for the sugar content of their bread. Interestingly, it has nothing to do with nutrition but is rather a confusing tussle over taxes.

It involves an exemption of Value-Added Tax (a different name for what we know as GST) that an Irish Subway franchisee requested. The franchisee, Bookfinders Ltd. cited the fact that bread is considered to be a staple food in Ireland, and because of that, their hot takeout sandwiches (of which bread is a key component, naturally) should not be subject to VAT. The Supreme Court countered with the judicial zinger that Subway’s bread had so much sugar it could not be legally defined as “bread,” so couldn’t be tax-exempt.

“[T]he judges ruled that Subway’s bread is not a staple food because its sugar content is 10 percent of the weight of the flour in the dough; the Value-Added Tax Act 1972 stipulates that sugar, fat, and ‘bread improver’ cannot add up to more than 2 percent of the weight of the flour. (Those limits are in place to prevent things like pastries and other sweet baked goods from being labeled as ‘staple foods’ and exempt from being taxed.)

Justice Donal O’Donnell dismissed Bookfinders’ appeal on Tuesday, although he did acknowledge that some of the arguments presented on their behalf were ‘ingenious.’ An Appeal Commissioner also said that Subway’s hot sandwiches were not eligible for a zero-percent tax rate, so Bookfinders was doubly denied.”

I remember the first time Subway had trouble with the contents of its bread: Back in 2014, the scientifically-questionable “Food Babe” blogger, Vani Hari took them to task for using the dough conditioner azodicarbonamide (ADA) in their buns because ADA was also used in yoga mats and shoe soles. While the ADA flap caused Subway to drop the ingredient from their bread recipe, I doubt they will revisit the sugar content today, to benefit one tax-objecting franchisee. Besides, if Subway bread is too sweet to be “bread,” it follows that it must be… cake? A pivot to Subway cakewiches would be “ingenious” indeed!