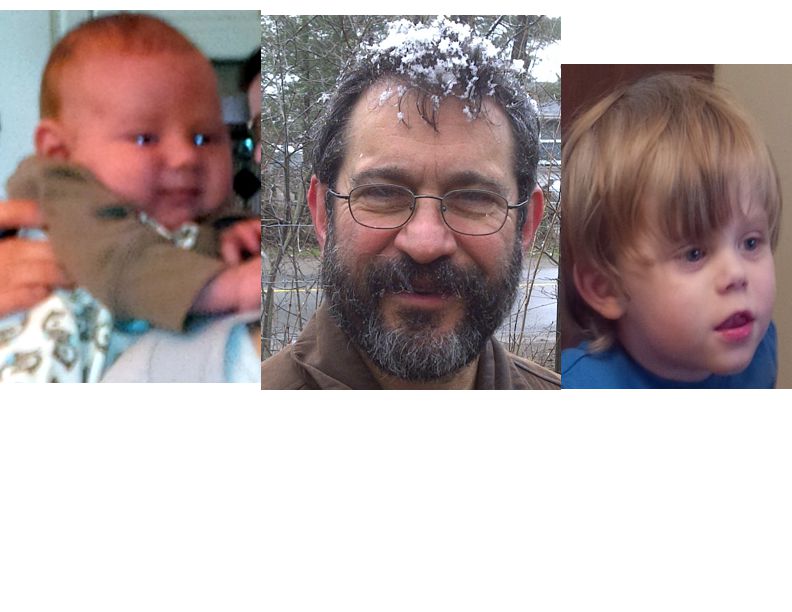 This weekend was my treat of the week — I got to visit my grandsons and help the eldest celebrate his third birthday. His younger brother is only five weeks old, so he’s pretty clueless about what’s going on around him other than the immediate needs that his still developing nervous system tells him about, which

is mostly digestive in nature. However, as I’m not around my grandsons on a daily basis, I can really see the changes that take place between the times that I see them. And since today we are speaking about chins, I thought I’d make a collage of the two grandsons and their grandfather and compare their chins. I was tempted to add in the faces of my two dogs, but then where does a dog’s chin start…and end?!

The Evolution of the Human Chin
Have you ever thought — like really thought, hard — about why we have chins? Neither have I. But a lot of scientists out of there have. (Also, the friend who recently sent me a Smithsonian.com article on that exact subject, and who tried to engage me in a spirited debate about the origin of eyebrows too.) It turns out, the longer you think about chins, the cooler they become! And there are two leading theories as to why they even exist.

First, the mechanical: the chin may be the face’s way of protecting itself from the stresses of speech and chewing. A study out of the University of York in England compared the jaws of Neanderthals and modern humans and their different chewing-load capacities — the results suggested that the chin evolved as a sort of muscle fulcrum, to maintain resistance as our jaw components grew smaller.

Second is the sexual selection theory, which proposes that chins evolved as a way of attracting mates; with wider chins indicating good genes in males, and narrower ones testifying to the estrogen levels of females. From Smithsonian.com:

“Zaneta Thayer, a graduate student at Northwestern University, and Seth Dobson, a biological anthropologist at Dartmouth, examined the sexual selection hypothesis by measuring the chin shape of nearly 200 skulls in a museum collection, representing people from all over the world. The pair discovered that there is a small but distinct difference in chin shape between the sexes, with men having a taller, more pronounced chin. They argued in the American Journal of Physical Anthropology in 2010 that this difference is evidence against explanations that the chin evolved to resist mechanical stress. If chins evolved in response to eating or talking, then there should be no difference in chin shape between the sexes because, presumably, men and women eat and talk the same way.”

Though there may be no hard-and-fast answer, we certainly have a lot to chew on (!) when it comes to chins. The eyes may be the windows to the soul, but the chin is the windowsill. It’s extraordinary to think that our bodies are such highly tuned machines that even a humble part like the chin has a magnificent purpose!