DFC | Blog | A Tomato of a Different Colour 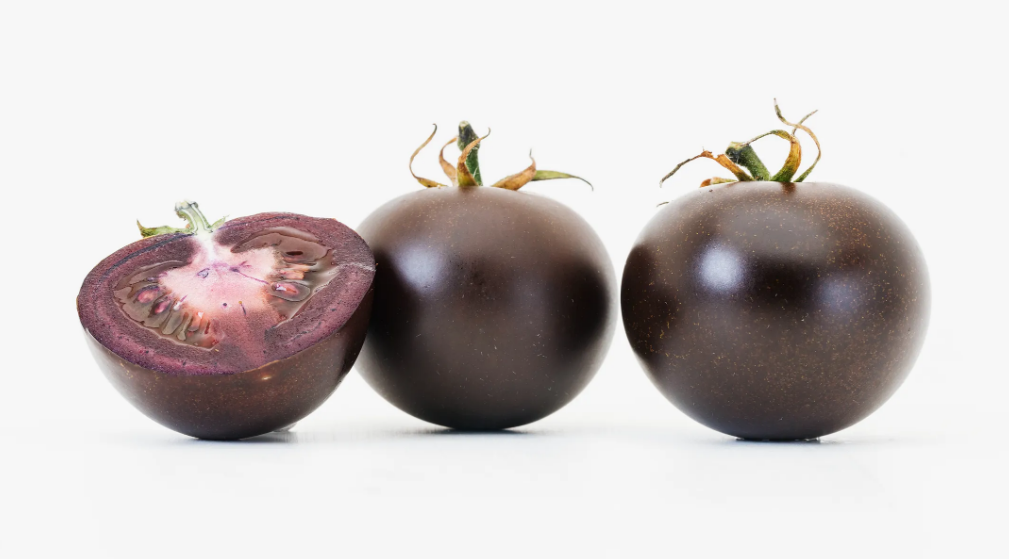 We’re coming up to the end of this year’s tomato season, and while it makes me sad, it also means we’re that much closer to next year’s tomato season! I’m hoping that will bring the debut of a new tomato that I just read about in Wired: a regally purple berry (yes, berry) that packs a major antioxidant punch.

The creators of this tomato genetically modified it with genes from a snapdragon, which boosts its colour and anthocyanin content — the same antioxidant found in blueberries and blackberries. Its gorgeous appearance marks a shift in GMO strategy: away from impressing farmers with yields and hardiness, and toward consumers trying to make healthier choices.

“Norfolk Plant Sciences, a company cofounded by [the purple tomato’s inventor, plant scientist Cathie] Martin, plans to roll out a purple cherry tomato in a handful of test markets in 2023. The biotech firm is also working on purple tomato juice, sun-dried tomatoes, and beefsteak tomatoes, and plans to sell seeds for backyard gardeners. ‘We hope people will eventually grow their own,’ says Martin. […]

While purple-skinned tomatoes have been developed through conventional breeding, they don’t accumulate high levels of anthocyanins in the flesh. There’s evidence from other researchers that these compounds may help prevent cancer, reduce inflammation, and protect against type 2 diabetes. And in a 2008 study, Martin and her team found that mice that were predisposed to developing cancer lived 30 percent longer on a diet supplemented with purple tomatoes than mice on a regular diet supplemented with normal red tomatoes. (Of course, animal studies don’t always translate to humans, and there are many lifestyle and genetic factors that may affect a person’s cancer risk.)”

The developers are hoping that the time of the “Frankentomato” has passed, and younger consumers who’ve seen the successful track record of GMOs in the food chain will be more willing to try a modified product, especially if health benefits are involved.

While the above-mentioned test markets will be in the U.S., I hope it goes well and Canada follows suit soon after. I’m intrigued by the flavour possibilities — tomato varieties can be so subtly different from one another. And what a spectacular Caprese salad or pizza sauce these jewel-toned beauties would make! I await the future of the tomato with glee — and will keep you updated.